For some geographical locations, the development of Serbian ecclesiastical art in Hungary may be traced from as early as the 15th century.  Among the major centres, Ráckeve (Srpski Kovin), Komárom (Komoran) and Győr (Đur), as well as – somewhat later – the Monastery of Grábóc (Grabovac) are the most prominent.  In Ráckeve, located on Csepel Island, Serbs settled in 1440, when they were granted special privileges by King Vladislaus (Ulászló) I of Hungary (also known as Władysław III of Poland).  At that time, they even rebuilt a late-Gothic church, which would be decorated with late-medieval paintings in 1514. In subsequent periods, during the Ottoman occupation, the Serbs’ firmest spiritual stronghold was the Monastery of Grábóc, founded in 1585.

In the late 17th century, after a failing attempt to free the Balkan Peninsula from Ottoman rule, Patriarch Arsenije III Čarnojević arrived in the territory of Hungary with the fleeing people during the Great Exodus of the Serbs in 1690 and established the new seat of the Eparchy of Buda in Szentendre.  The 1690s represented a significant turning point in Serbian history as the late 17th century saw thorough changes in Serbian culture under the influence of contemporary European trends. Szentendre was assigned a central role in this process by becoming one of the most important hubs of Serbian art and spirituality. In that period, headed by monks from the Monastery of Rača, even a scriptorium was opened in the town. At the same time, the presence of icon painters working in the spirit of the traditional late-Byzantine orientation is also palpable. 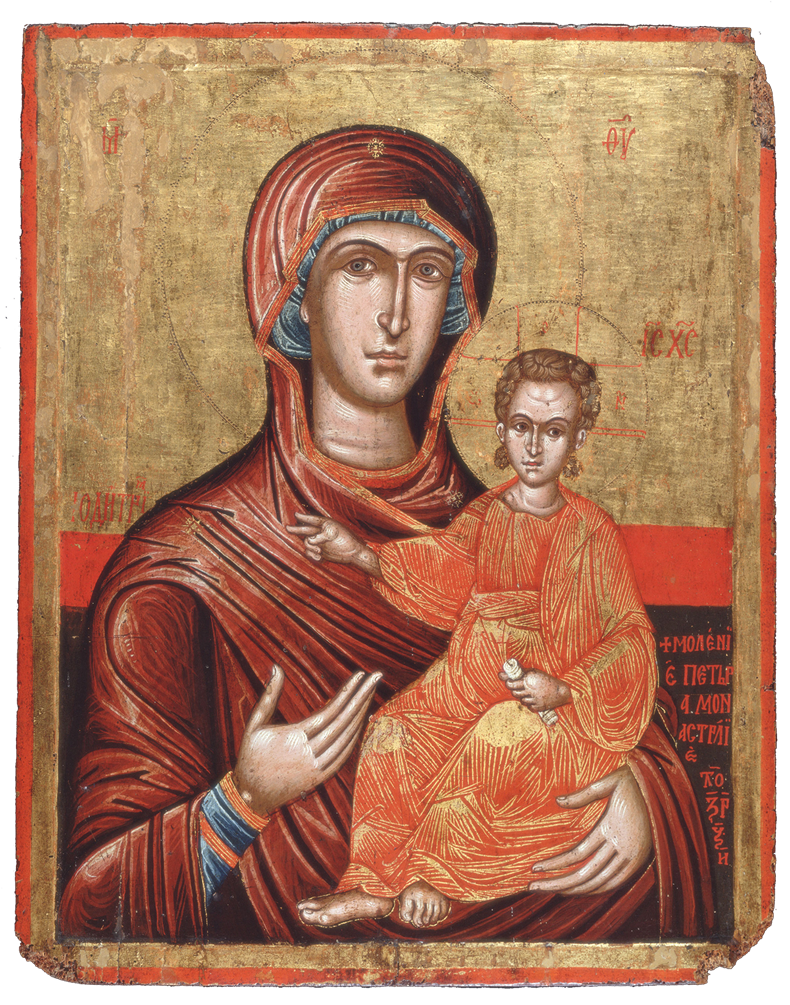 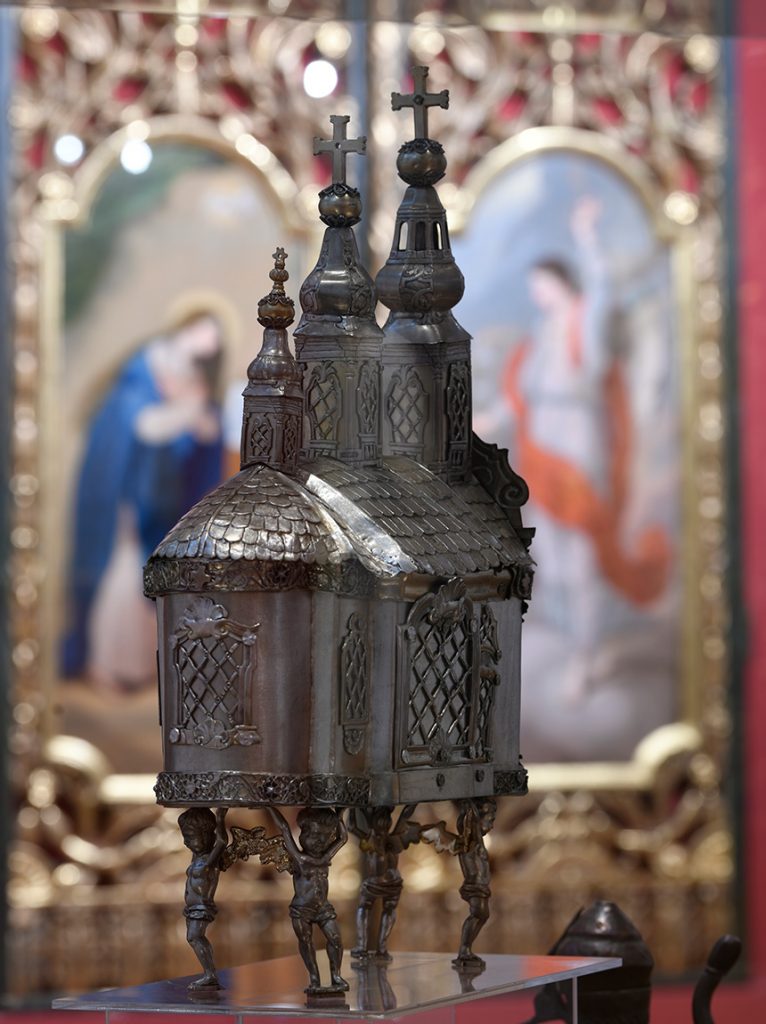 In the first half of the 18th century, adherents of the traditional orientation included self-trained folk icon painters, who were mostly active in small village churches. However, as a result of a more liberal and inventive approach, their painting also exposes the first signs of change: departure from the established stylistic orientation. In addition to these icons remarkable for their imaginativeness and decorativeness, works by better-educated painters, essentially also of late-Byzantine fine art, are also represented at the exhibition. Of these artists, Ostoja Mrkojević, master Mitrofan, as well as Nedeljko Popović and Georgije Ranite, icon painters from the Banat/Bánát Region, are distinguished by their refined stylistic expression.

Apart from icons, Serbian churches in Hungary were well-supplied with various liturgical vessels, vestments and other church items, too.  The evolution of the stylistic features characteristic of these specimens was linked to the dominant currents in graphic art and other art forms.  However, as opposed to icon painting, which adhered to the foundations defined by traditional late-Byzantine arrangements for the longest time, items of applied art would be enriched by baroque and, subsequently, rococo stylistic elements rather early.  As of the mid-18th century, besides local Serbian goldsmiths’ and other artisans’ workshops, it would be increasingly common to place orders for liturgical equipment with well-known Hungarian and Austrian masters as well. In addition, high-value works of art would make their way here from more remote European workshops, too.  Thus, the liturgical items held by the Museum exhibit outstanding wealth and diversity, while highlighting distinctive tendencies in the development of modern Serbian art as well.

In the middle of the 18th century, Patriarch Arsenije IV Jovanović Šakabenta launched far-reaching reforms that also affected ecclesiastical painting.  Conducive to a symbiosis of baroque and late-Byzantine arrangements, the new artistic model was particularly well received in urban settings. Furthermore, the new directions in the area of painting were also endorsed by Dionisije Novaković, Bishop of Buda.  He is to be credited with the fact that, in the second half of the 18th century, leading masters of this artistic trend, such as Jovan Popović, Stefan Teneczki, as well as Vasa Ostojić, a painter from Novi Sad, painted iconostases within the Eparchy. Aside from them, itinerant icon painter Jovan Četirević Grabovan, with late-Byzantine elements – employed primarily on the basis of the Creto-Venetian method – dominant in his painting, also worked in the territory of the Eparchy.  At the time of the rise of monumental baroque iconostases, around 1765, Teodor Simeonov’s painting workshop arrived in the Kingdom of Hungary from the southern Balkans. A little later, it would undertake the painting of the churches of Ráckeve and Székesfehérvár (Stoni Beograd) in a simplified late-Byzantine manner. Members of the workshop painted a number of individual icons for the churches of the Eparchy, well reflecting the value of established compositional arrangements.

In the history of the existence of the Eparchy of Buda, the late 18th century and the first decades of the 19th century were still a period of development. At that time, Pest, Buda and Szentendre continued to be important centres of Serbian culture and education. The most significant Serbian painters of late-baroque and classicist stylistic trends were employed in the Eparchy during this period. Most of them former students of the Arts Academy of Vienna – apart from iconostases – they also painted several individual icons and portraits. Among these masters, Pavel Đurković, a native of Baja, Mihailo Zivković, a painter from Buda, creator of the iconostasis of the Church of the Annunciation in Szentendre, as well as the influential Novi Sad painter, Arsenije Teodorović, a representative of Serbian classicist painting, were particularly notable. 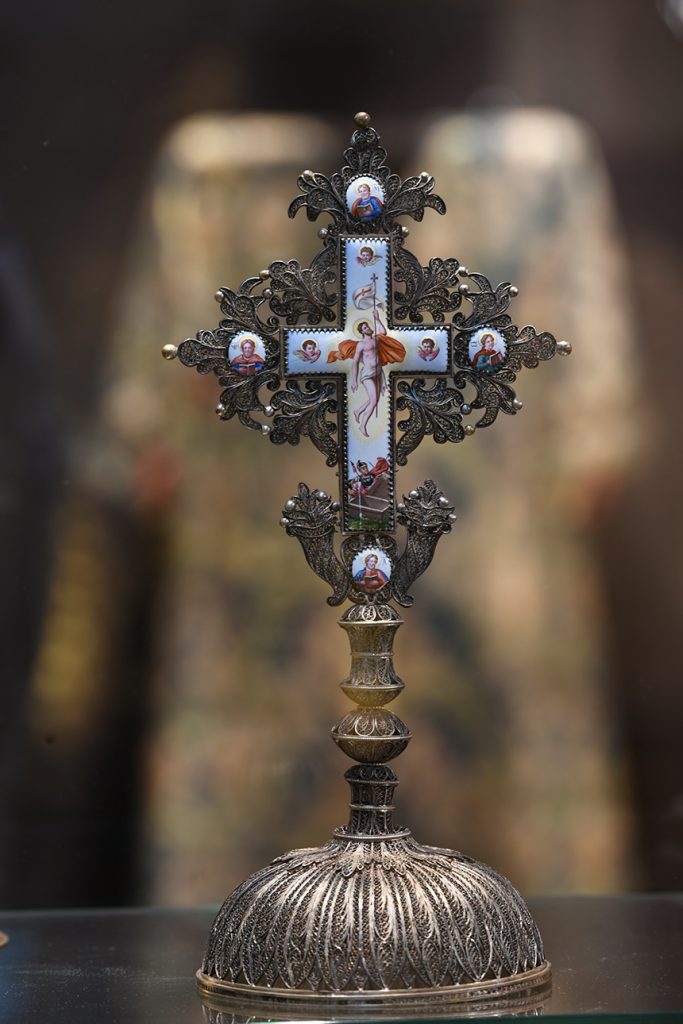 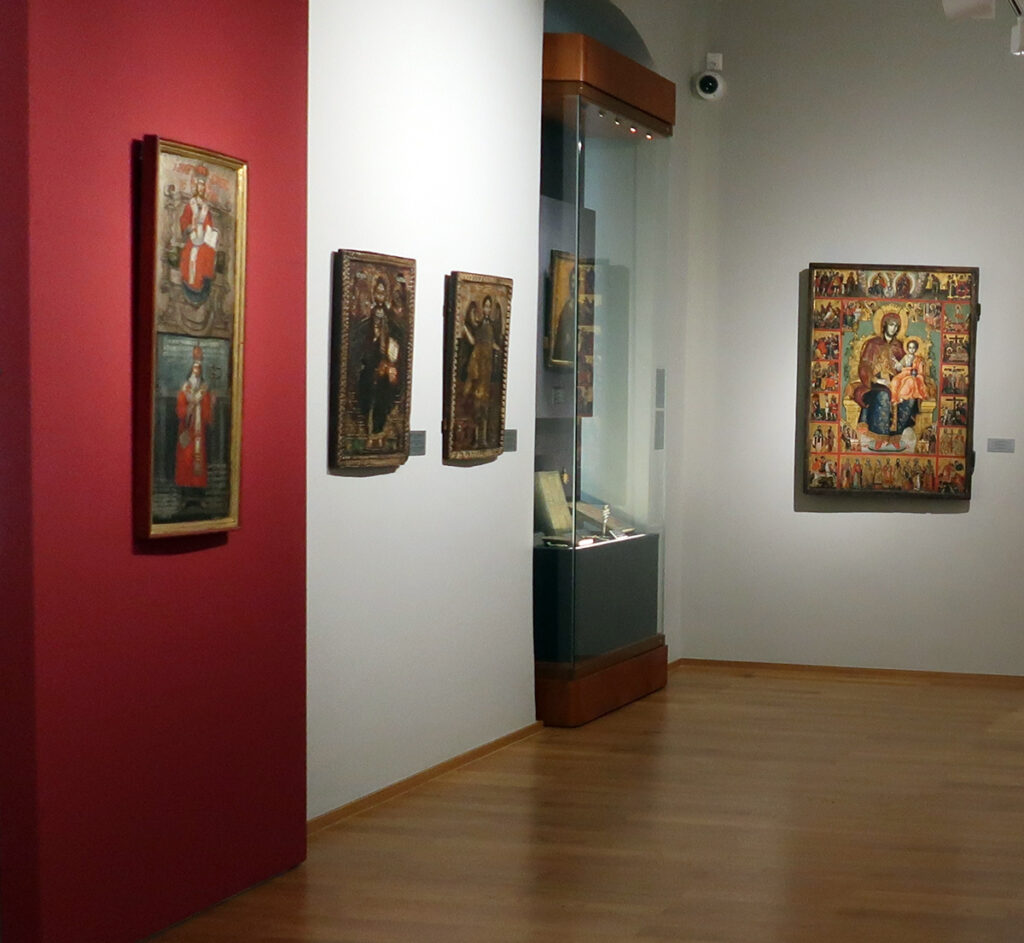 The Serbian Church Museum of Szentendre holds and displays only a part of the Eparchy’s art treasures, while the remaining heritage items are kept in as many as forty Serbian churches currently located in Hungary’s different regions. The basic stock of the collection offers a comprehensive overview of the artistic development of the Eparchy. At the same time, it also presents the principal features of Orthodox ecclesiastical art in the broader Danube Region, especially for the 18th century, which saw the complex processes of the revival of Serbian culture, as well as of its integration into Europe’s prevalent currents in these areas. As a consequence of contemporary European artistic influences, Serbian art abandoned medieval/late-Byzantine characteristics in this period.  While retaining its own spiritual and artistic identity amid these processes, it also promoted unique values in church art, some of which are represented at this exhibition as well. 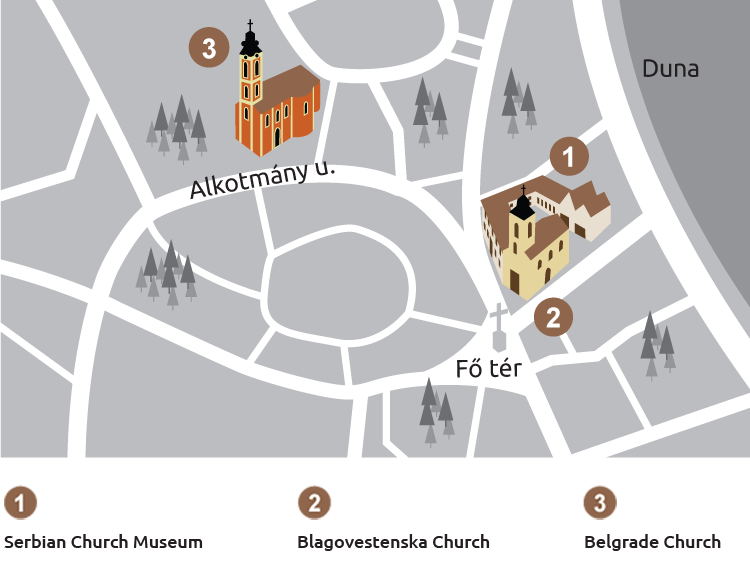